We had to run Sports Day slightly differently this year due to COVID and the need to continue to keep people safe but at least we had one and the competitive streak came out in everyone!  The whole school had taken part in National Sports week in the 4 days leading up to Sports Day and had tried out some new events every day.  We did equestrian, boxing, rowing, boccia, handball, baseball and rhythmic gymnastics which provided some fantastic challenges and a great way of learning about some of the events that will be taking place in the up and coming Olympics.

Every pupil and staff member at East Wichel belong to a House and Sports Day is by far the biggest House competition we run through the course of the year.  Our House captains led their House's out, proudly flying their House flag as the whole school paraded round the field, ending up on the playground singing 'We Will Rock You'.  The atmosphere was electric and there was such a sense of anticipation!

There were a variety of different races that each year group took part in and every child in the school from Nursery to Year 6 got to compete in at least 1 event.  We saw children sprint, balance eggs on spoons or quoits on their heads, complete an obstacle course, dribble footballs, throw nerfs or javelins, do an agility run and jump the hurdles.  For those who placed 1st, 2nd or 3rd in a race, they were able to take their place on the winners podium!

Our school values shone through in every event, from the aspiration the children showed in wanting to do their very best, to the love shown by their team mates (there was some serious chanting and cheering going on!) and the sense of community by being part of a House team and the wider East Wichel school community.  And not only that, it really showed us how great so many of our pupils are at sport and how much enjoyment they get out of it.

Of course it is a competition and it is important that the children learn how to lose and win respectfully so we all met on the playground again, with the flags flying proudly, with more singing and chanting, and the results were announced:

But also well done to everyone else who took part - you were a credit to your House and the school and there will be plenty more opportunities for your House to win with more House competitions planned for next year!

We are sorry we could not have parents to watch but each class has made a video of their Sports Day and these will be shared on the Class Dojo pages for you to see and enjoy watching with your children.

So who will be the winners next year?! 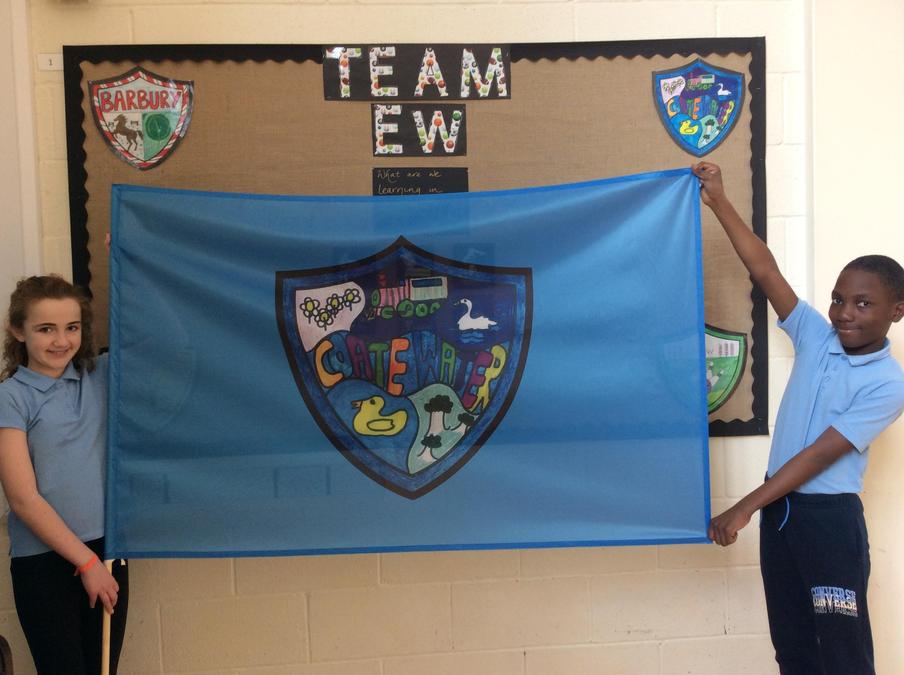 These competitions were held at the Swindon Athletics ground and we took a team of 10 children to each one.

At the Year 5/6 competition each competitor had to complete an 600m long distance run, a standing long jump, a vortex throw and a 75m sprint.  For the Year 1/2 competition, the only difference was the long distance run which was slightly shorter at 400m.  Every competitor's times and distances were recorded by the officials and these were converted to points, added up and then the winners announced!

We were so incredibly proud of every pupil who represented East Wichel. They all showed such aspiration to do their absolute best, were so appreciative to have been given the chance to represent their school and they showed so much love in the way they encouraged and supported each other and we have no doubts that putting our school values into practice, along with their great ability, made such a difference.

Our Year 5/6 team came 4th out of 11 schools and this is the highest East Wichel has ever placed in this competition.  Well done to the entire team, you were amazing.

As for our Year 1/2 team, they came 2nd!  What an amazing achievement - we have never gained a top 3 place in this age category or any of the Quad Kids competitions and we were all bursting with pride when the results were announced!  Not only that, but Poppy came top as the best performing girl in the competition.  Again this is a fantastic achievement!

We certainly hope to build on our success next year and are hoping we can enter many more competitions and give as many children as possible the chance to compete - we really do have some talented pupils in our midst! 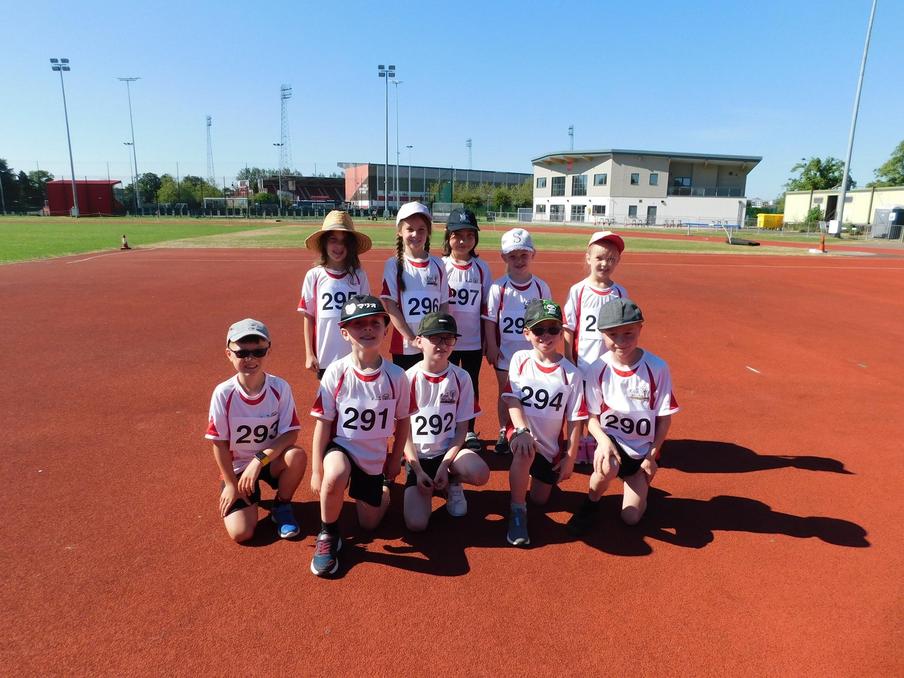 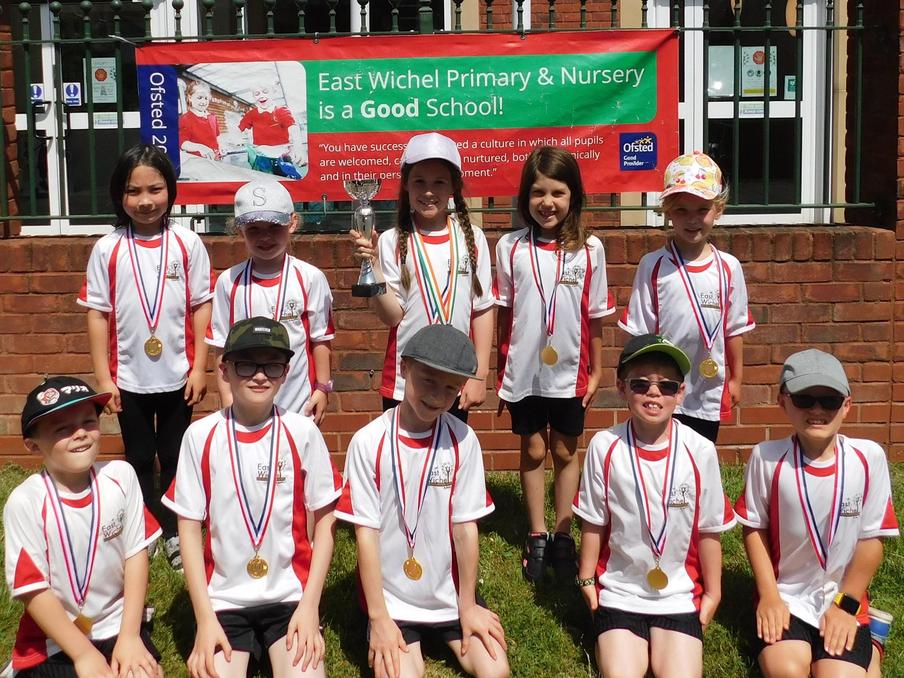 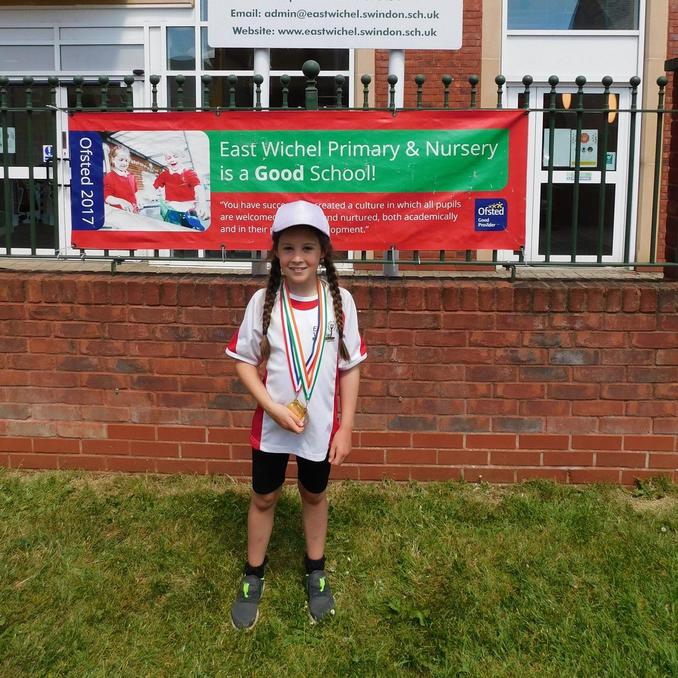 A huge thank you and well done to those who represented East Wichel in the football match yesterday evening. We came up against a very tough opposition, and despite the loss, everyone showed massive levels of determination and enthusiasm to do their absolute best and perform even better in the second half.

I would also like to say a huge well done to those children who were playing their first ever football match for East Wichel, you all represented the school so well and I hope you enjoyed it and learned a lot from the experience. You can all be really proud of the way you played! 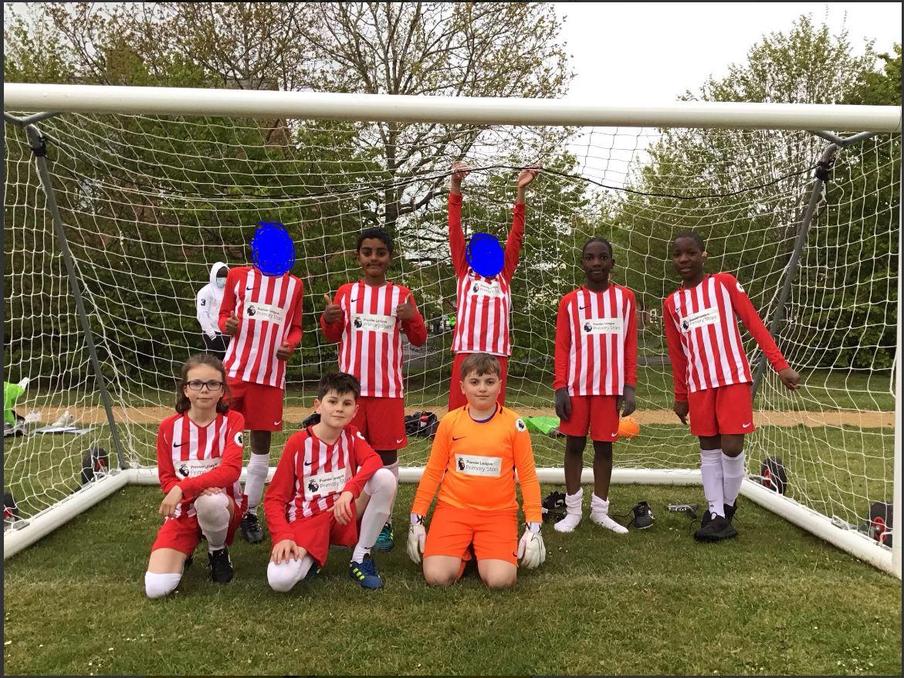 We have had a revamp of our main playground and the Foundation Stage playground with some fabulous new markings for all the children to enjoy and make playtime so much more fun.  Ensuring that children stay active during their playtimes is really important and the new markings will not only help with their fitness levels but there are some great games that can be played on them so we know this will improve all their PE skills too.  We had a great day of training provided by Inspired Schools and Fortius PE and some of our Year 5 children took part in a Playground Leaders training session where they learnt how to run different activities - hopefully next year when we may not have to be in bubbles anymore they will be running lots of lunchtime activity sessions and House competitions.  In the meantime it has been wonderful to see the children using the markings and creating their own games, although it has to be said 4 Square is the most popular game by far.  We wonder if your children might be able to teach you how to play at home - you just need something to mark out 4 squares and a ball! 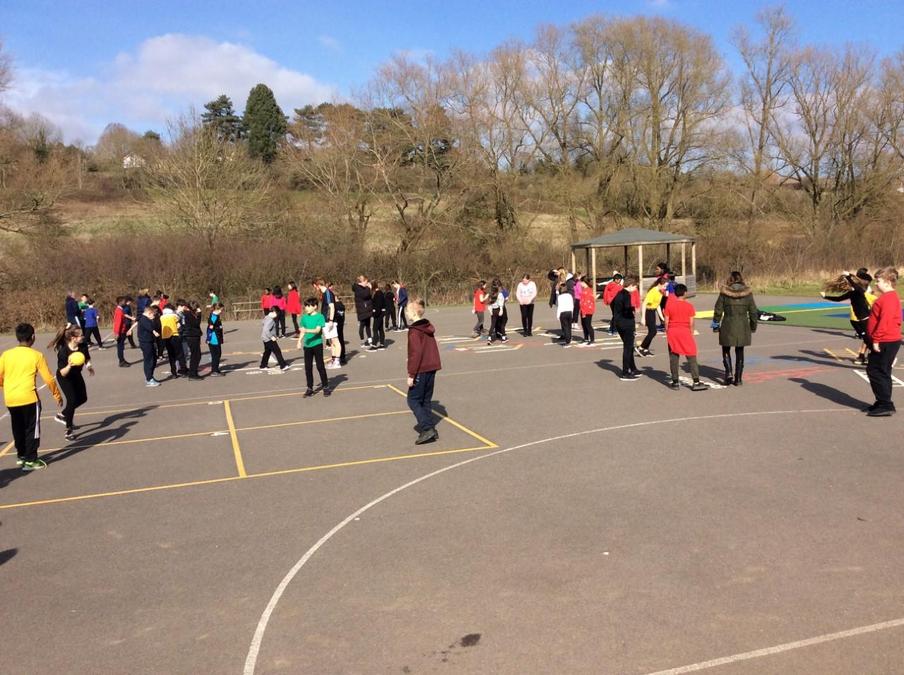 In Term 4 we got set for the Olympic Games by travelling to Tokyo!  Everybody was encouraged to get as active as possible and log their activity on the Get Set For Tokyo website to score points for their House.  Each activity logged was converted into kilometres and this got teams to different destinations on the way - we had croissants in Paris, feta cheese and olives in Athens, fried chicken in Atlanta, did some salsa dancing at the carnival in Rio, had a bar-b-que on Bondi beach in Sydney, then Chinese dragon dancing in Bejing before finally arriving in Tokyo!  As always the competition was fierce and the leaderboard changed several times over the course of 6 weeks but the team that made it to Tokyo first were Shaw!  Awesome job to all those in Shaw house and well done to everyone else for making it such a great competition! 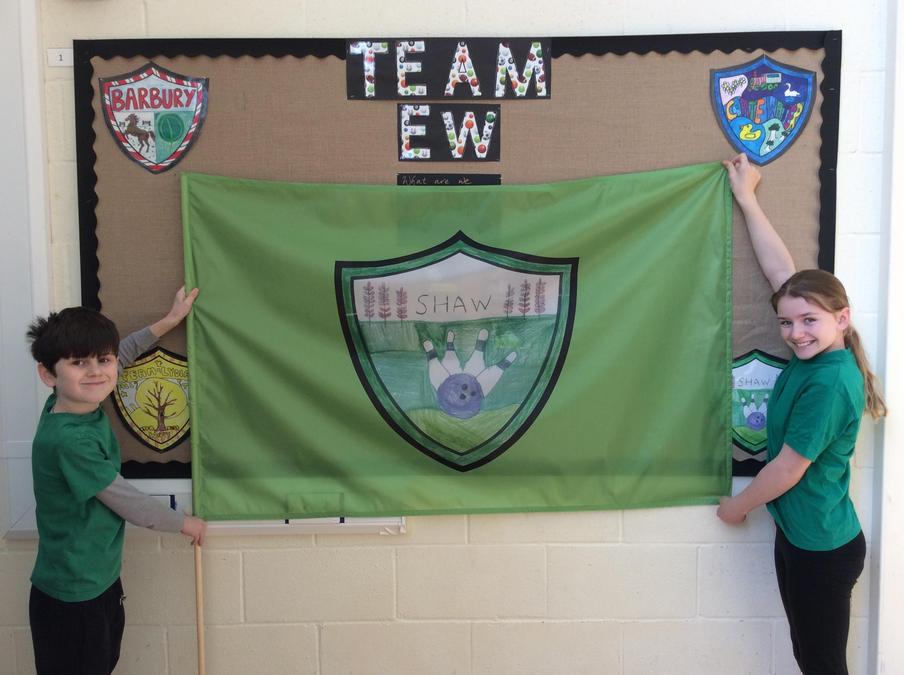 Even with another lockdown we were able to enter the Swindon Schools Gymnastics competition in Term 3.  Children were asked to create their own gymanstics routine at home and submit a video entry for judging.  On the days that they would have had PE in school, they were given gymnastics lessons to follow at home to help them with creating their routines.  We were so impressed with all the entries we got and the standard was really high.  The competition between schools was tough but we did have some medal winners who we are very proud of! 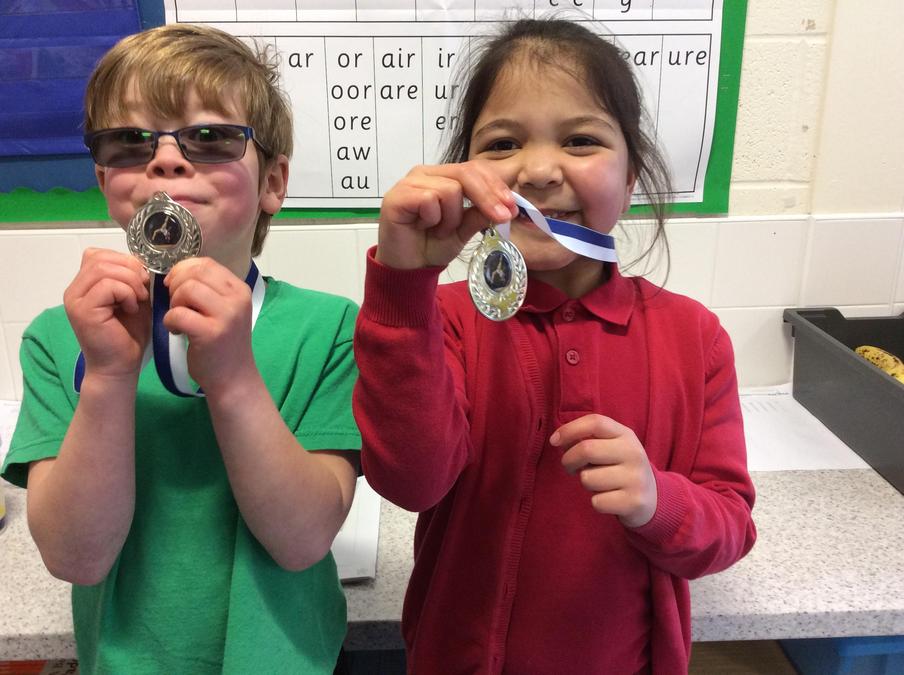 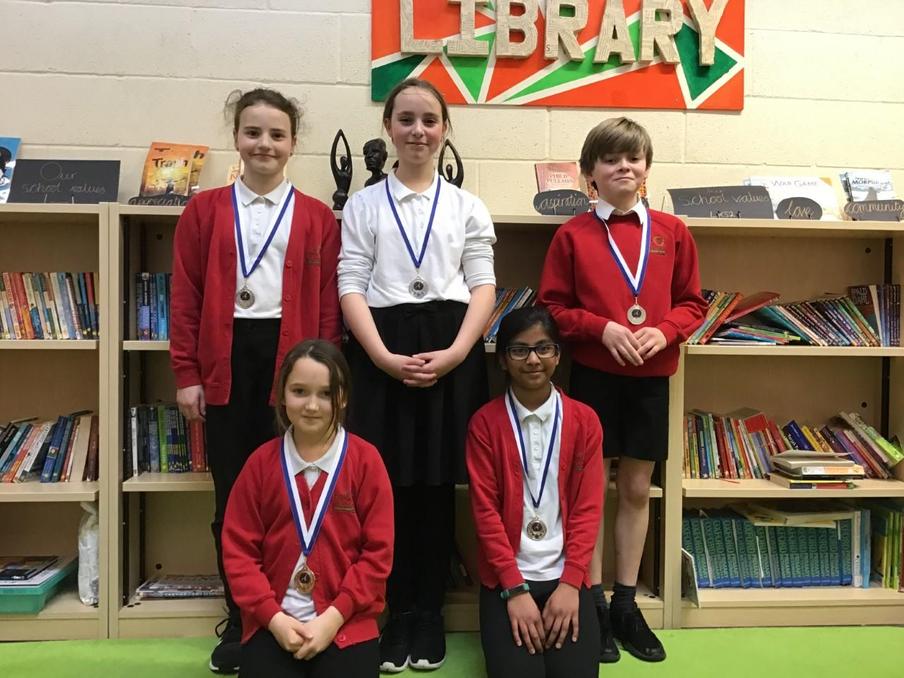 We may have been put into another lockdown and school may not have been open as usual but this did not stop us having a PE House competition!

This competition was open to all the children and their families and friends - the more people who entered, the more points your house could win.  An orienteering challenge was set up around East Wichel with a series of control cards that needed to be found.  On the control cards were different exercises to be done, the name of a member of staff, a Roman numeral, a number and a letter - participants then had to complete a sheet with all the information and submit photos of them doing the exercises. The letters then spelt out East Wichel. For those families who do not live in East Wichel, different challenges were set each day and when they sent in evidence of completing these, a letter was revealed so they could spell out East Wichel too.  Each day extra challenges were set so bonus points could be won.  We even had a challenge linking to our value of love and we had some lovely hearts made out of twigs, leaves and stones, that were then placed outside school.

This competition was a huge success with so many families competing in all weathers - we had gales, storms, sunshine and even snow but this did not deter anyone and the photos submitted showed how enthusiastic everyone was - there were some very big smiles even whilst doing burpees!  All the Houses could have won but in the end it was Lydiard House who scored the most points and were crowned the winners!  Well done to all those in Lydiard but also to everyone else who made it such a great competition! 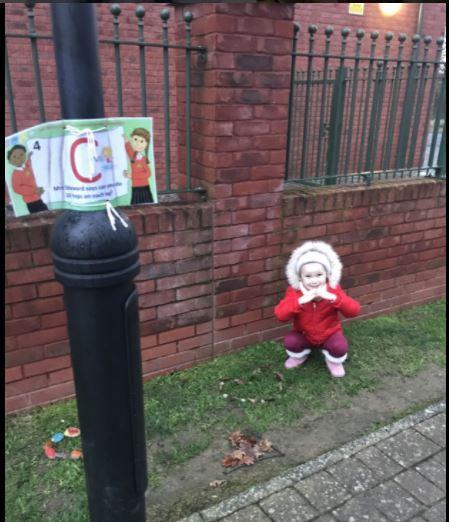 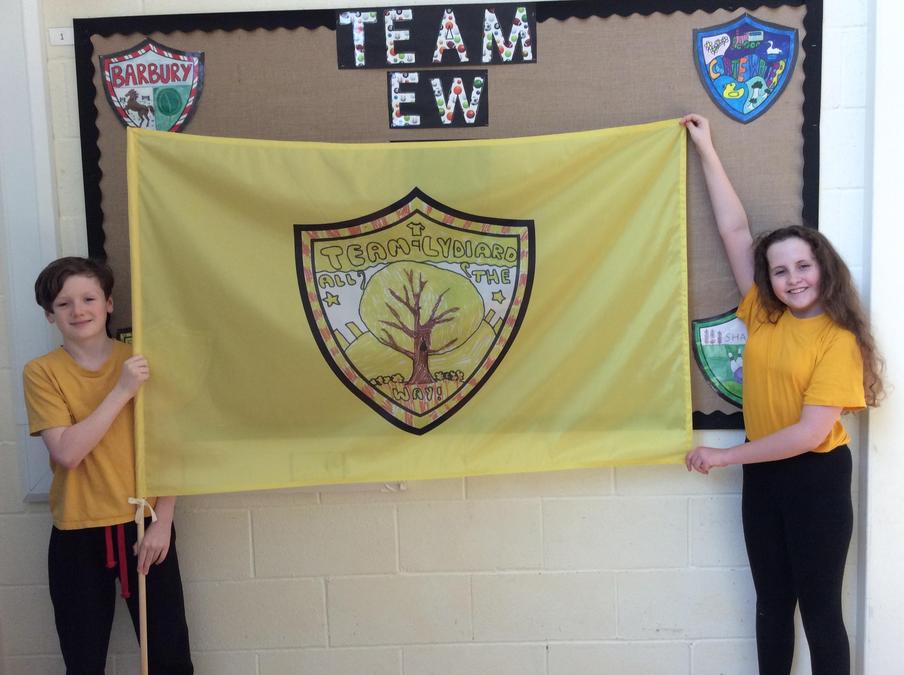