Note that the Governing Body have chosen to adopt the NGA model complaints policy, as follows.
Introduction

East Wichel Community Primary School & Nursery endeavours to provide the best education possible for all of its pupils in an open and transparent environment. We welcome any feedback that we receive from parents, pupils and third parties, and we accept that not all of this will be positive. Where concerns are raised the school intends for these to be dealt with:

In order to do so, the governing board of East Wichel Community Primary School & Nursery has approved the following procedure which explains what you should do if you have any concerns about the school. All members of staff will be familiar with the procedure and will be able to assist you.

Which procedure do I need?
Sometimes, when concerns are more specific, there are alternative and more appropriate policies for dealing with them. The following list details specific topics of complaints, and the correct policy to refer to. You can access these policies on the school website or ask for a copy from the main school reception.

Raising concerns
The majority of concerns can be dealt with without resorting to the procedure. Where you have a concern about any aspect of the school or your child’s education or wellbeing, raise this with your child’s class teacher via the phone or in person. Ideally, they will be able to address your concerns on the spot, or can arrange a meeting with you to discuss the issue.

All concerns will be dealt with confidentially, although the staff member may need to take notes if they feel that the matter may need to be taken further or it may arise again in the future. Any such notes will be kept in accordance with the principles of the Data Protection Act 1998. However, such notes would be able to be used to as evidence if further investigation was required, or if the concern became a formal complaint.

Safeguarding
Wherever a complaint indicates that a child’s wellbeing or safety is at risk, the school is under a duty to report this immediately to the local authority. Any action taken will be in accordance with the school’s safeguarding policy which can be found on the school website.

n order for complaints to be resolved as quickly and fairly as possible, East Wichel Community Primary School & Nursery requests the complainants do not discuss complaints publically via social media such as facebook and twitter. Complaints will be dealt with confidentially for those involved, and we expect complainants to observe confidentiality also.

Complaints that result in staff capability or disciplinary
If at any formal stage of the complaint it is determined that staff disciplinary or capability proceedings are necessary in order to resolve the issue, the details of this action will remain confidential to the headteacher and/or the individual’s line manager. The complainant is not entitled to participate in the proceedings or receive any detail about them.

Procedure
If you need to raise an issue in the first instance, please do so with the relevant member of staff who will be happy to talk to you and seek to establish a solution. If you are not satisfied and with this response and believe the issue has not been resolved, please use the following procedure as detailed below. 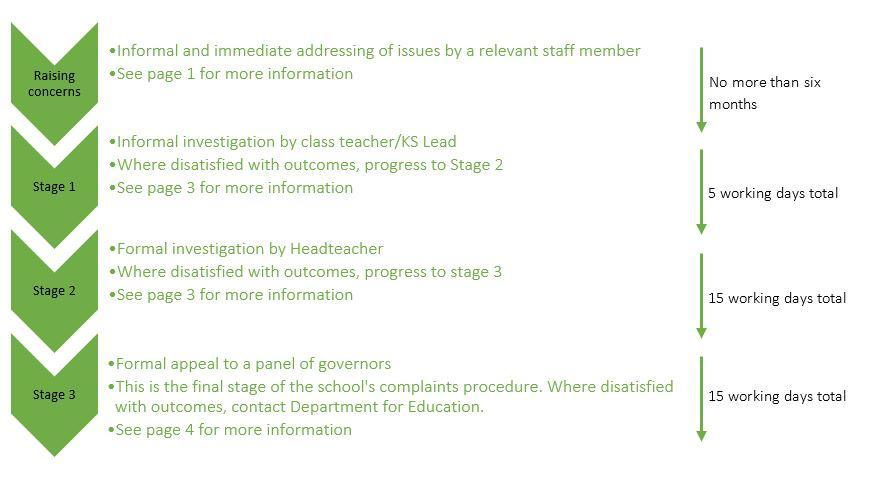 East Wichel Community Primary School & Nursery will endeavour to abide by timeframes stated under each stage but acknowledges that in some circumstances, this is not always possible due to the complexity of information needed to review a complaint or difficulties regarding individual’s availability to deal with the complaint, for example. If it becomes apparent that it is not possible to complete any stage of the complaints procedure within a given timeframe, the individual responsible for handling the complaint will contact the complainant as soon as possible and come to an agreed timeframe that works for all parties involved.

Where as a result of raising a concern the complainant still feels that the issue has not been addressed, or where the outcome has been that the complaint needs further investigation than can be resolved briefly, they may progress by making an informal complaint. In doing so, the following steps will be followed:

2. The complainant must explain in writing

3. The class teacher/KS lead will respond within 2 working days (excluding those which fall in the school holidays) of having received the written complaint. They will explain what action they intend to take.

4. Where the complaint is about a member of staff or a school governor, the class teacher/KS lead will arrange an informal mediation meeting between the two parties to see if a resolution can be come to.
5. The staff member will provide a written confirmation of the outcome of their investigation within 5 working days (excluding those which fall in the school holidays) of having sent confirmation of the intended action. Where the complainant is not satisfied with the outcome, they are able to progress to stage 2 of the complaints process, and launch a formal written complaint.
6. The staff member will make a record of the concern and the outcomes of the discussion which will be held centrally for twelve months, in line with the principles of the Data Protection Act 1998

Stage 2 – formal investigation by the Headteacher

3. A log of all correspondence in relation to the complaint will be kept in accordance with the Data Protection Principles.

4. The Headteacher will consider all relevant evidence; this may include but is not limited to:

5. The Headteacher may decide to have a meeting with the complainant (and where relevant, the subject of the complaint) if they feel that it would be appropriate for the investigation.

6. After considering the available evidence, the Headteacher can:

7. The Headteacher must inform the complainant of their decision in writing within 10 working days (excluding those that fall in the school holidays) of having issued written acknowledgement of the receipt of the complaint. They must explain clearly why they have come to the decision that they made. They must detail any agreed actions as a result of the complaint. Finally, they must provide the complainant with details of how to progress the complaint to stage three if they are not satisfied, providing them with the contact details of the clerk to the governors (see the end of the procedure for these).

Stage 3 – appeal – review by a panel of the governing board.

f the complainant wishes to appeal a decision by the Headteacher at stage 2 of the procedure, or they are not satisfied with the action that the Headteacher took in relation to the complaint, the complainant is able to appeal this decision.
They must write to the clerk (see the contact details at the end of the procedure) as soon as possible after receiving notice of the headteacher’s decision, briefly outlining the content of the complaint and requesting that a complaints appeal panel is convened.
The clerk will fulfil the role of organising the time and date of the appeal hearing, inviting all the attendees, collating all the relevant documentation and distributing this 5 days in advance of the meeting, recording the proceedings in the form of minutes, and circulating these and the outcome of the meeting.
The complainant must request an appeal panel within 4 weeks of receiving the headteacher decision or it will not be considered, except for in exceptional circumstances. On receipt of this written notification, the following steps will be followed:
1. The clerk will write to the complainant within five working days (not including the school holidays) to confirm receipt of the appeal request and detail further action to be taken.
2. The clerk will convene a panel of three school governors. All three panel members will have no prior knowledge of the content of the complaint.
3. The appeal hearing will take place within 10 working days (excluding those which fall in the school holidays) of the date of the confirmation letter from the clerk to the complainant, confirming the appeal.
4. In addition to the panel, the following parties will be invited, where applicable:

The complainant is also able to bring a companion with them to the hearing if they wish. Where the subject of the complaint is a member of staff, that staff member is also able to bring a companion with them.
The companion will be a friend or a colleague. Neither party is able to bring legal representation with them. If after the hearing any party feels that legal action is necessary, please see the contact details at the end of the procedure.
5. If the attendance of any pupils is required at the hearing, parental permission will be sought if they are under the age of 18. Extra care will be taken to consider the vulnerability of children where they are present at a complaints hearing.
6. Where the complaint is about a governor, the complainant may request that the appeal is heard by an entirely independent panel. It is at the discretion of the governing body who will notify the clerk of their decision. Where an entirely independent panel is required, timescales may be affected while the school source appropriate individuals for the review.
7. The panel can make the following decisions:

8. All parties who attended the meeting will be informed in writing of the outcome of the appeal within 5 working days (excluding those which fall in the school holidays).
This is the final stage at which the school will consider the complaint. If the complainant remains dissatisfied and wishes to take the complaint further, please see the contact details at the end of the document. The school will not consider the complaint beyond this.
Unreasonable complaints
Where a complainant raises an issue that has already been dealt with via the school’s complaints procedure, and that procedure has been exhausted, the school will not reinvestigate the complaint except in exceptional circumstances, for example where new evidence has come to light.
If a complainant persists in raising the same issue, the Headteacher will write to them explaining that the matter has been dealt with fully in line with the school complaints procedure, and therefore the case is now closed. The complainant will be provided with the contact details of the Department for Education (see the end of this document) if they wish to take the matter further.
Unreasonable complaints include the following scenarios:

The Headteacher will use their discretion to choose not to investigate these complaints. Where they decide to take this course of action, they must inform the chair of governors that they have done so, explaining the nature of the complaint and why they have chosen not to investigate. If the chair deems it appropriate to, they can redirect the Headteacher to investigate the complaint. The full complaints procedure will commence from stage one on this direction.
If the chair upholds the HT’s decision not to look into the complaint and the complainant deems this decision to be so unreasonable that no other rational body in the same position would have made that decision, then the complainant may write to the Department for Education (see the contact details at the end of the document).

Contact details for external organisations if not satisfied with the outcomes of the complaints procedure in full.